Happy Halloween. I don't even know when I wrote this.


"Ow," said the clown, accidentally bumping into the strong man again.
"Whoops, sorry about that."

It was not his fault.

The problem wasn't that he was a clumsy, silly oaf, which he was, but that he was a member of the Dark Carnival. Back in the day when the Dark Carnival was the mythical creation of Ray Bradbury in his stories "Something Wicked This Way Comes" and "The Illustrated Man," it was pretty cool to talk about. Most people thought of it as the place where childhood dreams were corrupted, where monkeys capered without fear of peanut-throwing audiences and where the fire-breather and the tattooed man could plot evil conspiracies over whatever it was that Ray Bradbury was thinking about that particular day. It was sort of frightening, and if you were afraid of ventriloquist dummies, it was probably even scarier. There were no ventriloquists in the Dark Carnival, but everyone was willing to bet you money that they'd fit right in.

"We livez in the dark carnival
Ya ha ha ha ha
Evil clownz drinkin all the Faygo
Bam shackalackalackala!"

It was this sentiment more than anything that made children under the age of 14 want to join the Dark Carnival when they got old enough to legally work for the old carnies. In fact, some children even cheated, working when they were seventeen and absolutely not eighteen, under the pretense that they were "Dark Carnival Interns." Everyone know that this was just a cover, that they were really becoming evil souls working for the Dark Carnival and should be stopped, but no one really cared either way.

The Dark Carnival was not particularly evil or spooky, but was actually just a poorly lit carnival. This did not explain its bizarre and fascinating appeal. No one really understood it, in fact. It was pretty spooky, I guess because most carnivals are well-lit, and this one was not. That made it different.

The clown that bumped into the strong man was fairly myopic, and combined with the poor lighting and a bottle of bourbon consumed just a few moments before, this totally explained the minor accident. "Jesus," the strong man exclaimed in consternation. "Watch out, Mr. Clown!"

"Oooops," murmured the inebriated clown. "Sorry, mister Roosevelt." But the strong man's name was not Roosevelt, and the apology was lost like dust to a storm.

The clown stumbled into the ringmaster's tent, barely able to see two feet in front of him. The ringmaster was sitting at his desk in a fairly frightening pose, sort of hunched over and very evil.

Mr. Johnson," the clown shrieked rather loudly. The ringmaster winced. "Mr. Johnson, I can barely see a thing in here."

"Please, stop shouting," the ringmaster told him. "I was trying to take a nap. That's why I turned off - look, it's hard to talk to someone I can't see. Are you still listening?"

The clown wasn't, really, but this was to be expected. He was trying to find a piece of candy that he'd dropped on the ground - the damn carnival, he thought to himself. This damned dark carnival. I can't see very well.

"Ah, Miller," murmured the ringmaster. "Did you ever hear how this carnival got its name? How it came to be called the dark carnival?"

"Who said that?" asked the clown, who'd forgotten that he'd told the ringmaster his name was Miller. His name was actually Rumparuck, which he felt was a silly name for a clown.

"It was thirty-odd years ago," mused the ringmaster. "Thirty odd years ago. When I decided to make a carnival. And I named it after myself: 'Mr. Dark's Carnival.'"

"I thought your name was Johnson," the clown told him, but the ringmaster was lost in a world of his own devising. Nostalgia, the clown told himself, is the bitter fruit that Age bears. He thought this was deep and witty, and maybe it was, but even a blind squirrel finds a nut occasionally. The last deep and witty thing he'd thought before this was "the Taco Supreme is the bitter fruit that Taco Bell bears." Why this was meaningful to him was anyone's guess. The fact that it was meaningful to over five hundred thousand people was even more startling, until you realized how many people actually existed.

"Mr. Dark's carnival, and little did I know that this place would become known as 'The Dark Carnival.' I was going to make this a happy place with bunnies and flowers and pixies, and magical leprechauns," continued the ringmaster. The clown was busy fiddling with his shoes by this time and had managed to tie both of him together, but the ringmaster continued with his rambling anecdotes for at least ten or fifteen minutes. The ringmaster never actually mentioned why he thought his name was "Mr. Dark" in the first place, when it was actually "Felipo Guiterrez," and why he thought they'd named the place after him when he'd actually been a plumber when the carnival was created. The place was only called the Dark Carnival because they couldn't afford the lighting, and millions of children shivered in their beds.

Pray that the Dark Carnival never visits you... with its sad, pathetic clown, and the dark, twisted monkeys that the carnival bought from a roadside monkey stand. Pray! Or else you might end up paying five dollars to visit the Dark Carnival... with its evil, twisted freak show consisting of two guys who look kinda like Tony Danza and a jar of brine shrimp labeled "Sea Monkeys" ... and you won't be able to see any of it, because the carnival is too dark.
Posted by Friendly Dinosaur at 7:57 PM No comments:

After Audrey was born, I thought I should keep a journal about everything. Everything! Something that Audrey could read when she was older, to trace the early childhood that she'd never remember. Anyway, that never happened. 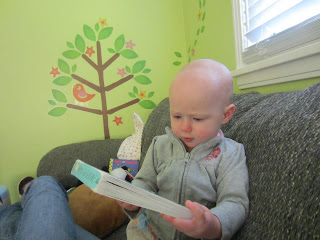 She's REALLY cute. Right now, Audrey is incredibly into
* Books (she wants to read all of them three times in a row.)
* Bananas
* Tablet computers
* Things on the floor that are very small and possibly edible
* Daredevil stunts
* Sign language for 'bath' (it's the only one she's really sure about.)
* Watching me cook

It's pretty good. I'm beginning to feel like a real member of the human race again. Like, I get to sleep... all night! Almost every night! And Audrey is maybe the friendliest person in the UNIVERSE. She's always, ALWAYS happy to see Rebecca and me.

Pretty soon, she's going to be ... a lot more coherent, and one day, probably a little less jolly. I'm going to miss how HAPPY she is all the time. She's adorable!

Posted by Friendly Dinosaur at 2:35 PM No comments: