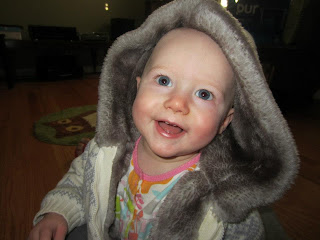 Babies make it tough to write!  I wrote Mindtrip during a three month binge just before Audrey was born. At the rate I'm writing, Psychopomp's first draft is going to take six, seven months. But today, she's given me a present - a nap that's been going on for nearly two hours.

She turned one a couple of weeks ago! We had a combination Thanksgiving and Birthday Party. 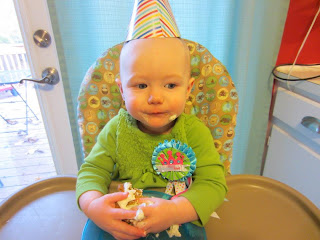 It was pretty good.  Audrey ate a cupcake.

A year ago was a very tiring, confusing time. Audrey did two things: slept and cried. It's amazing how much she's grown in the first year. She started out at 21 inches and ended up growing ten inches in twelve months. She walks. She says "Duck." She has a snarky sense of humor. She likes to be scared and mock-screams in delight.

It's kind of amazing.

Her favorite song: "Class Clown Spots a UFO", probably followed by the theme songs for 21 Jump Street and Daria. Her favorite food: macaroni and cheese, as well as pulled pork and any sort of fruit. Her favorite toys: cell phones, remote controls, and plastic plates.

I don't want to forget any of this.